Kongsberg Target Systems offer high quality support services handled by some of our most qualified personnell.

For personal support, please contact our headquarter in Norway or the regional partner in your country

Are you planning on a conversion from paper to electronic targets or looking at building a completely new range?
Deciding on the ideal solution for your electronic target system can seem challenging at first but let us help you to make it easy!
We have over 25 years of experience designing and installing electronic target systems and have assisted numerous customers with the perfect solutions for both indoor and outdoor use.
Our different targets can easily handle calibers from 4.5mm air pellets to Cal .50 BMG, and some targets are better suited for certain uses. We are here to help find the right system for you!
Consult one of our experienced team members on video chat to discover the numerous advantages and opportunities by installing electronic targets on your new range. If you are converting from paper targets, you will quickly discover the many great benefits for your range undoubtfully attracting more shooters.
Our customers save both time and money by securing the right layout of the planning phase from start to finish.
Contact us on the link below to schedule a non-binding consultation with our dedicated team via video conference.
Take the first step towards a shooting range that will be a faster, safer and more exciting first choice by the shooters.

Let our expertise assist you fitting electronic targets at your range. 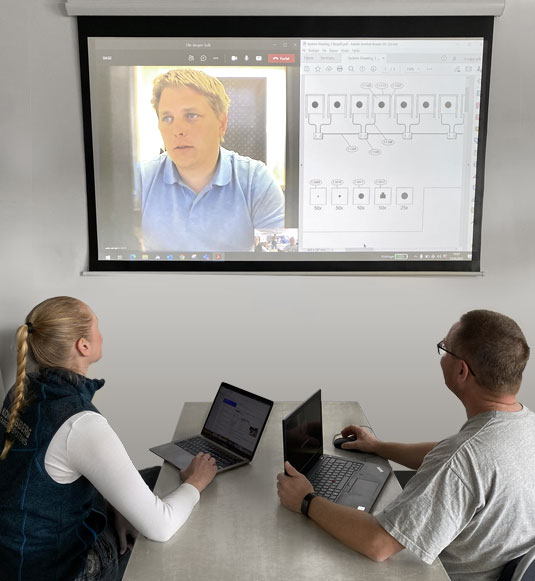 We have collected some of the most commonly asked questions about our targets on this page.
If you don’t find the answer your are looking for, please do not hesitate to contact our technical support team
or our sales team.

What different types of targets do you have?

KTS has targets for most calibers, shooting distances and events – ranging from 10m air weapon targets to long range targets at 2000m/yds.

We have two different working principles in our target systems:

The optical detection system is used for smaller targets, mostly for 10m to 50m indoor ranges – for air guns or caliber .22LR. Advantages of an optical system is:

Our optical targets are camera based, imaging the projectile passing through the detection area providing world class detection accuracy.

From experience and testing KTS has chosen not to use this technology on larger targets or with higher energy rounds, as the consequences of a stray shot on an optical target can lead to much more complex repairs than on an acoustic target system. Our 10-50m optical targets are however fully armored for specified calibers.

Acoustic detection is the most used detection method on the market. This is where the supersonic “boom” or the impact of subsonic projectiles is detected by acoustic sensors (“microphones”) in the target. However, all targets from KTS are working as a “closed chamber system”, where the acoustic sensors basically are placed inside a chamber shielded from the environment. This leads to the following advantages:

Closed chamber acoustic targets are still the best and most reliable way to make high power electronic targets. They are a bit more expensive than open systems, but open systems should not be considered if reliability and precision is of concern.

Will an electronic target save me time?

Undoubtedly and for several reasons:

How does your system work as opposed to an Open System?

All outdoor targets from KTS are “closed chamber systems”, meaning that the acoustic sensors are placed inside a chamber shielded from the environment. This leads to the following advantages as opposed to an open systems:

Closed chamber acoustic targets are still the best and most reliable way to make high power electronic targets. They are a bit more expensive than open systems, but those should not be considered if reliability is of concern.

Is it difficult to install?

No, installation is quite effortless, in fact KTS personnel or representatives have only been present at a fraction of the installations made world wide. The system is designed to be easy to install and maintain.

Do your targets detect shots falling outside of the target?

No, only shots passing through the target are measured.

How is the system powered?

The system is  powered by mains power or battery.

Can I export my data from the system to my computer?

Yes, results can be exported in many ways. Among this, a range control computer connected to the system can control both the system and also gather all data, that can be shared to other medias depending on the solution you have chosen.

Do I have to buy a monitor?

If you are planning on shooting on a single lane and do not need to merge your scoring results with any other shooters, you can successfully purchase our PC Target system. With this system, you can connect the target to your own PC which will function as a monitor showing your results. However, if you need more than one lane, this option will not be useful as you would need one PC for each target. Contact your local sales representative here for a quote that fits your specific need.

Can the monitors and targets for outdoor shooting withstand extreme weather conditions?

Kongsberg Target Systems produce monitors both for indoor and outdoor use.

The outdoor monitors are designed so robust that they also meet several military specifications, and can handle all extreme weather conditions, including snow, dust, high and low temperatures.

How often do I have to change the rubber on my target?

That depends on target model, bullet size and shape, and shot concentration. For exact info, KTS issue specific target user manuals for each target model. For example we have a 300m target that accept 3000 rounds before maintenance is necessary to continue getting maximum accuracy. Maintenance consists of simply rotating a rubber band.

For the 10-50m/yds OpticScore target, the detection system is not fitted with any rubber. Changing the aiming card when it is worn, is almost the only maintenance necessary. The spot is created by the center hole in the aiming card, thus a good shooter will rarely need to replace it which results in extremely effortless operation.

Can I use the targets at home?

Yes, several of our target models are also available in a single lane bundle, where you use your own laptop as a monitor.

I have problems with a target, who do I contact?

If for some reason you should experience difficulties with the installation of our targets or if you have any other technical questions, please contact our support team at the bottom of this page or here

Do you ship all over the world and how much does it cost?

We ship to most countries and regions of the world. Contact your nearest KTS representative here for more information on shipping.

Will an electronic target improve my shooting?

Experience shows that the instant feedback you get from shooting at electronic targets is significantly increasing the results for both experienced marksmen and the less experienced shooters.
Read more about the many advantages of an electronic target from Kongsberg Target Systems here